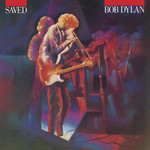 Every song on the album is about strong personal faith and features heavy gospel influences; unlike the previous record, many critics dismissed Saved for its dogmatic songs and bombastic arrangements. While it still made a healthy #3 in the UK, it only managed #24 during a brief chart stay in the US and never went gold.
CCM Magazine described the album as an "open declaration of Dylan's deepening faith."

The cover of Saved originally featured a painting by Tony Wright of God's hand reaching down to touch the hands of his believers. However, this cover was subsequently replaced by a painting of Dylan on stage performing during that time period in order to downplay the overtly religious nature of the original cover. It has since been changed back on some re-releases.
A quote inside the sleevenotes reads, "'Behold, the days come, sayeth the Lord, that I will make a new covenant with the house of Israel, and with the house of Judah' (Jeremiah 31:31)".