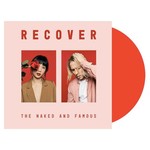 NZ indie pop progenitors The Naked and Famous return with Recover. Featuring singles 'Bury Us', 'Come As You Are and 'Sunseeker'.

Re-formed as a duo (founding members Alisa Xayalith and Thom Powers), Recover reasserts the group as one of modern indie-pop's most exciting sonic trailblazers, taking them to emotionally inspired depths, while maintaining their fresh effervescence.

While they have mastered the sonic art of dreamy, hook-laden synth-pop, The Naked and Famous have stuck to their guns as far as intimate storytelling. Recover is largely an autobiographical record rooted in a powerful sentiment of survival, and of the very
human process of self-preservation - of saving, choosing and celebrating oneself in a world constantly trying to put us down.

Of the record Powers says "Recover is about the duo "recovering ourselves, and our artistic vessel. The album is a statement of creative healing and a vehicle to plow forwards into our own future. We hope that the messages of healing and resilience have some effect on its listeners."