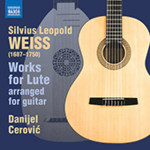 Silvius Leopold Weiss was acknowledged as the greatest lutenist of his age, composing over 600 pieces for the instrument organised into suites or sonatas. In these arrangements for guitar, Danijel Cerović has selected the only two of Weiss's sonatas to have been given poetic titles, Sonata No. 29 'L'Infidèle' ('The Infidel'), with its bell-like sonorities and triumphant conclusion, and Sonata No. 28 'Le Fameux Corsaire' ('The Famous Pirate'), thought to refer to the buccaneering pirate Blackbeard. Cerović also includes two of the great Tombeaux, elegies of profound and poignant depth.