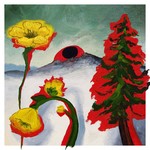 A bend beyond the last bend beyond, Woods keep on changing, thoughtfully and beautifully. The colours were always there, like trees blossoming just slightly differently each season, a synesthetic message coded in slow-motion. Recorded in Stinson Beach, the California enclave where the government once tracked one of the largest LSD rings in the world only to be questioned by the neighbours as agents prowled the woods, on Strange To Explain, the familiar jangling guitars recede to the background. John Andrews's warm keyboards and twining Mellotron rise around Earl's songs and dance across the chord changes like warm sunlight off the Pacific. The music feels a karmic landmass away from the creepiness of the uncanny valley.

Depending on where in the time-track one stands, it's their 11th full length (not counting collaborations, split LPs, EPs, and singles), and the 99th release on Earl's Woodsist label. By any standards, Strange To Explain is the work of a mature band, capable of both heavy atmospheric declarations like "Just To Fall Asleep" alongside extended-form pieces like the album-closing "Weekend Wind", unfolding in layers of trumpet and vibraphone and ambient guitars and stereoscopic percussion.