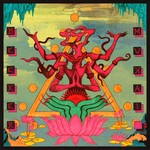 Susumu Mukai, originally from Osaka, Japan, is one of London's most sought after musicians, whose list of collaborators includes Floating Points, Vanishing Twin, Alexis Taylor and Fimber Bravo.

Jean-Gabriel Becker, originally from Paris, is a prolific composer for cinema, who has worked alongside Massive Attack on acclaimed film soundtracks and recorded with John Foxx.

A1. Dark Fields Of the Republic
A2. Tout Azimuth
A3. Spice War Part One
A4. More Eyes
B1. The Double
B2. Stellar Surf
B3. Phantom Limb
B4. Time Very Near