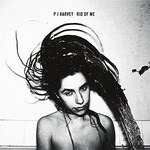 PJ Harvey
Rid Of Me (LP)

Just a year after the acclaimed release of her debut album Dry (1992), Harvey returned with her second studio album Rid Of Me in May 1993. Produced by Steve Albini, it featured the singles '50ft Queenie' and 'Man-Size' and charted at number 3 in the UK.

The album attracted reams of positive press on release. Pitchfork described it as "…PJ Harvey's searing and monumental album from 1993″, while The Guardian called it "…a raw album of frazzled nerves and frayed neuroses…" and the BBC suggested it was "A tough listen then, even at its comparative prettiest, but an essential one that demands your attention from beginning to end." Record Collector declared that "This is an album of defiance - harrowing and brilliant."