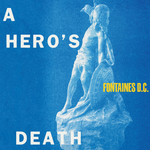 Barely a year after the release of their hugely acclaimed debut album Dogrel, cult indie-rock outfit Fontaines D.C. have returned with an intensely confident, patient, and complex follow up album, A Hero's Death

Arriving battered and bruised - albeit beautiful - the album is anything but a re-hash of the swaggering energy from their first record. Instead, the music is patient, confident, and complex - a heady and philosophical take on the modern world and its great uncertainty. First album review is in - 5/5 Q Magazine (UK)