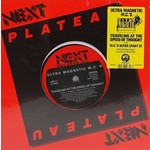 'M.C.'s Ultra (Part II Edit)' is part brag-rap, part baffling science lecture. Leaning heavily on the thesaurus, it's a slang heavy manifesto that elevated the boast rap to the next level. While Kool Keith would go on to be the group's breakout star, this is a showcase for the whole collective, right down to DJ Moe Love's slithery scratching sliding from one channel to the next.

Only previously released in the UK as a 7" that's now very hard to source, this is a chance to re-embrace this breakthrough from a legendary group.

A. Travelling at the Speed of Thought
B. M.C.'s Ultra (Part II Edit)