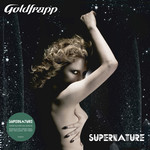 Originally released on 17th August 2005, Supernature has been out of print for many years. The album reached #2 on the UK Charts and was nominated for a Grammy in 2007.

A:
Ooh La La
Lovely 2 C U
Ride a White Horse
You Never Know
Let It Take You

B:
Fly Me Away
Slide In
Koko
Satin Chic
Time Out from the World
Number 1