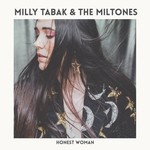 A storyteller in the Americana tradition, Honest Woman sees Tabak draw inspiration from her own life and from those close to her on an album of songs about what it means to be a woman.

"I wanted to give a voice to those who didn't have the chance to be heard. I also want people to recognise their own stories and find their own meaning in the lyrics."

The heartfelt lyrics combine with a true Americana sound influenced by Tabak's favourite releases from the Southern States.

Recorded live at Auckland's Roundhead Studios using vintage equipment and techniques, Honest Woman was mastered in Nashville by Paul Blakemore, who was also responsible for Carolina Confessions by The Marcus King Band - an album that has been hugely influential on Tabak's songwriting.

"I think people get quite confused about our music, in terms of genre because we are sort of like a Southern '70s sounding band and the music that came out of Muscle Shoals Sound Studio is very much like what I wanted to produce for this record," Tabak says.
"People love watching us play live and I wanted to capture that energy and sound on the album. We sound a lot sexier and soulful this time around," laughs Tabak. "Recording live really captured the movement of the music and all the human elements

I knew I wanted to hear that warmth from recording to tape just like a lot of my favourite records. I want people to feel like they're in the room with the band."

Milly Tabak & The Miltones are known as the masters of blending modern blues rock with the nostalgia of a vIntage record collection.