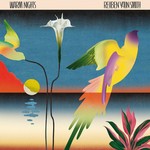 As a young football prodigy, Reuben Vaun Smith was signed to the Leeds United youth team as a rising talent. By 16 he'd been spotted and signed by Sevilla in Spain, and a professional sports career beckoned. But the dream was over before it really began. At 18 years old, he suffered a life-changing knee injury, catastrophically stopping his career in its tracks for good. With no back-up plan, Smith moved back to Yorkshire and contemplated what to do next.

Not long after a life-changing knee injury ended his professional football career, Reuben Vaun Smith's grandfather bought him a MIDI keyboard - and despite never having had a music lesson or touched a keyboard in his life, Smith retreated to the shed at the end of his garden and started to teach himself music production.

For a solid year, Smith spent every day in his studio at the end of the garden, and twiddled, dabbled, fiddled, experimented, explored, and delved into music.

Smith's music is imbued with a sunny approach, despite the sometimes grey and wet nature of winter living in the North of England. It is the sound of a young musician that refused to lie down and give up on his passions: when one door closed another one opened.

A1. Under The Thunder
A2. Photosynthesizer
A3. Trip On New Shores
A4. Sunshine Flute
B1. The Tides Roll In
B2. Open Chakras
B3. Rising Sun