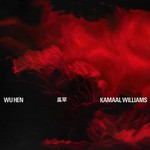 Wu Funk is very much a style of the here and now - a millennial take on jazz fusion - a style that reflects the wide-ranging aesthetic of the London jazz scene through which Williams has come up.

Cinematic strings from Miguel-Atwood Ferguson and virtuoso saxophone from Quinn Mason are textural additions that make for a deeper experience than previous releases.
Atwood-Ferguson's arrangements add yet another era of musical tradition for Williams to draw upon - the opulent charts crafted by the likes of David Axelrod and Gil Evans - and new textures for his group to react to.

When pressed for insight into the album's overarching themes, Kamaal proclaims:

"This is a revolution of the mind. A spiritual rebellion: To reach new heights requires separating ourselves from the material world and finding power in what's intangible. That's what music and art is for - whether it's a primitive emotion or something deep, you feel it. And there's a subliminal element that resonates throughout my work. If you're painting, it's what you're feeling as you're painting. And the person looking at that artwork or listening to that music, they can feel it too, because it's sincere."

"Wu Hen forges further into jazz-funk territory, staking out a middle ground between the spiritual fire and the glossy textures of smooth jazz, a terrain that keyboardist Lonnie Liston Smith himself mapped back in the 1970s."
Pitchfork

"Street Dreams is the opening track of the second solo album from London keysman Kamaal Williams, and it could easily be the concept for the entire thing: a sound trapped in glass between urban reality and a more spiritual plane, shimmering as it catches the light. Lush string arrangements from LA's Miguel Atwood-Ferguson swoon over slivers of funk bassline. Atop a gauzy sax a man's voice is heard effusively telling a slang-filled story about swerving the police.

There's a gentle evolution of Williams's style of recreating the thrill of jungle and broken beat on live drums, London club culture served organic, as on 2018's The Return. But while that album also established him as the king of the dazed meander, here he skewers Coltrane-era jazz with Pigalle, an exuberant reimagination of how a night out in 1950s Paris might have sounded.

A forerunner of the London jazz scene, Williams has always coolly evaded categorisation, whether DJing house as Henry Wu or making spectral slow jams and here it's as if he's attempting to reconcile those guises. He succeeds, with some surprises, flirting with glittering soul on Hold On, featuring the slurry-smoky vocals of Lauren Faith. Sweet street dreams indeed."
4 Out of 5 Stars The Guardian