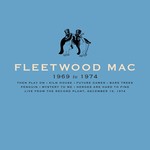 The CD set concludes with an unreleased recording of the band's December 15, 1974 concert at The Record Plant in Sausalito, California. The performance captures the band - Fleetwood, Welch and the McVies - on tour supporting their latest album, Heroes Are Hard To Find.