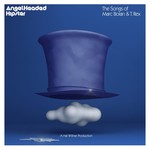 Marc Bolan has been famously cited as a major influence by some of the biggest names in music from David Bowie to Johnny Marr.

Bolan's golden era was in the late sixties and seventies when he was the biggest selling singles artist since the Beatles and the electric spark behind Glam Rock. He died in 1977 aged just 29 after a car crash in Barnes, London.

For 'AngelHeaded Hipster', a collection of major stars including Nick Cave, U2 featuring Elton John, Joan Jett, Peaches and Marc Almond have reinterpreted and reimagined some of his greatest tracks including Jeepster, Bang A Gong (Get It On) and Ride A White Swan.

The album was made under the direction of Hal Willner, a veteran of tribute records with a reputation for creating alchemy with diverse artists. His touch points are great composers - Nina Rota, Thelonious Monk, Kurt Weill, Charles Mingus.