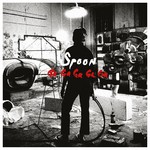 Gimme Fiction, the fifth studio album from Spoon, originally released in 2005 and featuring the single 'I Turn My Camera On'. Newly recut from the original masters.