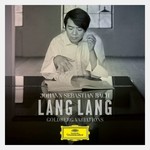 Bach's monumental Goldberg Variations stand alone in the piano literature as a work of unique artistry and brilliance.

Lang Lang first began exploring this masterpiece more than 20 years ago and presents this record as the outcome of a long personal and emotional journey. Marking a new stage in Lang Lang's artistic development, it is the project of a lifetime.

Alongside a studio recording is a contrasting performance, a single take from a recital in Leipzig's iconic St Thomas Church, where Bach worked and is now buried.

"Lang Lang offers the musical equivalent of a cinematic epic directed by Robert Altman or Steven Spielberg, with all repeats intact, including the Aria da capo. His Goldbergs are vividly detailed (sometimes to garish effect), markedly diverse in mood and expression, meticulously thought out in terms of style yet highly subjective, and brilliantly yet not brainlessly virtuoso." Gramophone

"Silly showmanship is forgotten. Bach has brought out the mature artist in him...As you might expect, the live performance, caught in a single take in a hallowed Bach space, is more spontaneous and compelling than the performance stitched together from multiple takes...Playing live, Lang Lang indeed shows himself a mature and individual performer, fully engaged with Bach's genius." The Times