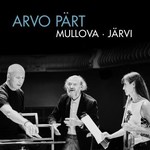 The works on Viktoria Mullova's new album devoted to Arvo Pärt's music for violin stem from the composers study of medieval church music, and are products of what Arvo Pärt himself describes as a 'tintinnabuli' style, developed by the composer in the 1970s through studying medieval church music 'I have discovered that it is enough when a single note is beautifully played. This one note, or a silent beat, or a moment of silence, comforts me. I work with very few elements - with one voice, two voices. I build with primitive materials - with the triad, with one specific tonality. The three notes of a triad are like bells and that is why I call it tintinnabulation.'

They have become some of the most iconic pieces in the contemporary repertoire and have reached out way beyond the usual 'classical' music world in their popularity. This album was recorded in the presence of the composer.

"Immutable, austere, impassable - the strength of Arvo Pärt's music lies in its ability to project an image as powerful and complete as the religious iconography it often seeks to replicate.

This is not music that hinges on sudden shifts and sharp contrasts. However, at its core lies the age-old dichotomy between freedom and control, head and heart - or 'mathematics … and love', as Pärt himself put it in last month's Gramophone feature on this recording. Keeping both elements in check - and in balance with one another - remains key." Gramophone Editor's Choice Awards issue 2018