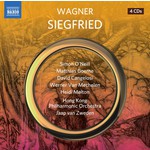 This is the third and penultimate release in the acclaimed cycle of Wagner's Der Ring des Nibelungen with the Hong Kong Philharmonic conducted by Jaap van Zweden. Of the star cast for Siegfried, Matthias Goerne has been singled out for particular praise by the critics, with Gramophone stating that he "sings Wotan beautifully, with much baritonal sophistication, predictable (from an experienced Lieder recitalist) care for words and able negotiation of trickier moments." Opera News wrote "Matthias Goerne is a revelation... [he] upholds the great tradition of Wagner singing."

Each member of this carefully selected cast has an established reputation in opera performance, and most are known for significant and highly demanding Wagnerian roles. These include tenor Simon O'Neill as Siegfried, one of the finest heldentenors on the international stage, and soprano Heidi Melton as Brünnhilde, who has been called "the Wagnerian voice we have been waiting for since Flagstad and Nilsson" (La Presse).

"Simon O'Neill may not be the most intuitive Siegfried on disc, but he's among the brightest-toned and most solid, showing no flatting even at the end of his bout with Brünnhilde. In Act 1 he occasionally sounds a bit like the Mime of David Cangelosi-a compliment to the latter rather than a critique of the former-but his Forging Song is a wild romp rather than a chore, and his sensitive singing in the Murmurs section is introspective and lovely. Cangelosi sings, rather than mugs, the role of Mime. And where he is nasty, the Alberich of Werner van Mechelen is sniveling. Quite the pair." ClassicsToday Jan 2018

"New Zealand tenor Simon O'Neill is surely the Siegfried for our generation. He may lack the sheer heroic strength and lyrical warmth of Melchior, or the honeyed sweetness that Remedios could command, but he makes up for it with a keen sense of involvement in the meaning of the words, a welcome admixture of humour, and a precision of delivery which would put some of his predecessors to shame." MusicWeb