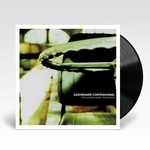 To kick off their 20th anniversary celebration, veteran emo rockers Dashboard Confessional have announced a special vinyl reissue campaign called The Early Days. As its title indicates, the series will specifically spotlight Chris Carrabba's first few studio releases, which helped jump-start what would become such a fruitful and lengthy career.

Along with the first ever vinyl release of The Places You Have Come To Fear The Most, this campaign also brings us the much-anticipated re-release of DC's seminal debut album, 2000's The Swiss Army Romance, which contains the anthemic "Screaming Infidelities" and "Again I Go Unnoticed".

A1. Screaming Infidelities
A2. The Sharp Hint Of New Tears
A3. Living In Your Letters
A4. The Swiss Army Romance
A5. Turpentine Chaser
B1. A Plain Morning
B2. Age Six Racer
B3. Again I Go Unnoticed
B4. Ender Will Save Us All
B5. Shirts and Gloves
B6. Not So Easy