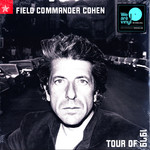 In 1979, after the release of his album Recent Songs, Cohen set out on an international concert tour accompanied by members of the Austin-based Jazz-Rock group Passenger; Field Commander Cohen was compiled in 2000 from recordings of the 1979 tour, and it presents an especially strong argument for Cohen's gifts as a musician.