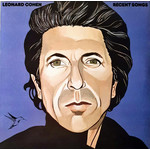 Recent Songs is the sixth studio album by Leonard Cohen, released in 1979. It was a return to Cohen's acoustic folk music after the Phil Spector experimentation of Death of a Ladies' Man, but now with many Jazz and Oriental influences.

The album includes Gypsy violin player Raffi Hakopian, and even a Mexican Mariachi band. Long-time Cohen collaborator Jennifer Warnes prominently appears in vocal tracks. Members of the band Passenger played on four of the songs and Garth Hudson of The Band also appeared on the album. "Came So Far for Beauty" seems to be an unaltered outtake from the unfinished 1975 album Songs for Rebecca, which also included early versions of "The Traitor" and "The Smokey Life" (then with music by John Lissauer).

"Ballad of the Absent Mare"'s metaphoric lyrics are based on the twelfth-century Ten Bulls (or Ten Ox-herding Pictures). The song is covered by several artists, notably Emmylou Harris on the album Cowgirl's Prayer (as "Ballad of a Runaway Horse").