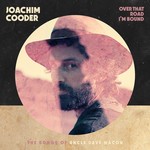 On his Nonesuch Records debut, Over That Road I'm Bound, songwriter and multi-instrumentalist Joachim Cooder uses the plain-spoken songs of country-music progenitor and banjo player Uncle Dave Macon as a jumping off point, playing with the lyrics and reworking melodies for his chosen instrument: an electric mbira (a variation on an African thumb piano).

Born in 1870, Macon built a repertoire of music from the latter part of the nineteenth century and revived it for the early twentieth century ears: minstrel show and vaudeville tunes, folk songs and spirituals.

1. Over That Road I'm Bound To Go
2. When Ruben Comes To Town
3. Come Along Buddy
4. Oh Lovin' Babe
5. Tell Her To Come Back Home
6. Backwater Blues
7. Rabbit In The Pea Patch
8. Morning Blues
9. All In Down And Out
10. Heartaching Blues
11. Molly Married A Traveling Man
12. When The Train Comes Along