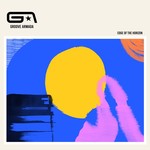 Groove Armada
Edge Of The Horizon

It's been ten years since Groove Armada released their landmark album 'Black Light'. They've been active in recent years - DJ sets, select live shows and the 'Twenty One Years' compilation - yet the prospect of a new album seemed unlikely. That all changed when they stepped out at the Boomtown Festival and saw the reaction from long-term fans and newcomers alike. "We walked on stage to a young crowd, there were 40,000 people there," smiles Cato. "We had the most amazing Hollywood Bowl type view from the stage and it just felt so fresh and relevant."

Initially they planned to complete some half-finished ideas that remained from the 'Black Light' era. Elements of the title track and 'Holding Strong' both remain from that original plan, but ultimately their creative connection resulted in their seventh album.

The album's lead single 'Get Out On The Dancefloor' puts an esoteric slant on their sound. The track features key 'Black Light' collaborator Nick Littlemore (Empire Of The Sun, Pnau), whose stream-of-consciousness vocals merge with Groove Armada's slick grooves to feel like a motorik twist on Talking Heads. The duo had accumulated hundreds of extracts of Littlemore's vocals and painstakingly edited them together into something fresh and vibrant.