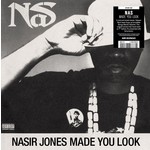 'Made You Look' was a shot in the arm for Nas at a time when he'd shed some of his core, street fanbase. After the unfocussed 'Nastradamus' and 'I Am…' albums he'd had a return to some kind of form with 'Stillmatic', but many felt he came off second best in the ensuing battle with Jay-Z.

This single, a club and street classic almost from the moment it dropped, is exactly what he needed to reconnect with his fans and to show he could still throw down. Lyrically, it's hardcore bragging 101, delivered with panache and numerous quotables that themselves would go on to be sampled.

Key to it all, however, is that beat. Salaam Remi was no stranger to resurrections, having almost single-handedly turned The Fugees from forgettable also-rans to major-players. The beat here is deceptively simple, one of hundreds of records to chop up Incredible Bongo Band's 'Apache' but doing so in a way that felt instantly fresh. Nearly 20 years later it still has the power to get a stationary crowd moving, an empty dancefloor to fill, a still head to nod.

This original version has never been on 7" before. It's presented with full artwork.