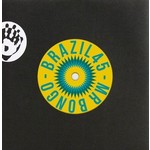 'Ma Ma Ma Ma Maé (A Lingua Dos Anjos)' is taken from his 'Alô Alô, Como Vai?' album from 1980, which is arranged, produced, and features keys by the don, Lincoln Olivetti. The song contains trippy lyrics singing about flying saucers and angels.

'Dona Culpa' finds Jorge featuring on a cool mid-tempo groove track taken from Cauby Peixoto's 'Cauby! Cauby!' album (also from 1980). Singer Cauby Peixoto had a long and stellar career, recording and releasing music from the mid-1950's all the way up until his passing in 2016.