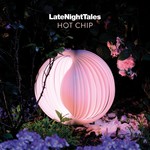 In these strange and viral times, music may not be able to save but it can certainly salve; and we've never needed such unguents as we do now. Thank goodness for Hot Chip, then. If you've ever wondered what a bath full of ecstasy might actually sound like then step this way, take off your bathrobe and relax into this aural peregrination.

Hot Chip were formed via the friendship between Alexis Taylor and Joe Goddard with Al Doyle, Felix Martin, and Owen Clarke completing the line-up. Subsequently, they've gone on to establish themselves as one of the UK's most interesting acts - including nominations for Grammies and Mercury Music Prizes - with music that is contemplative yet also ecstatic.

The centrepiece of this mix are four new Hot Chip songs, including their reading of the Velvets' 'Candy Says' whose lyric, "bluebirds fly over my shoulder" melts perfectly into the electronic birdsong of Kaitlyn Aurelia Smith's 'Who I Am & Why I Am Where I Am'. Keeping it in the family Alexis's father Neil elegantly delivers an extract of the syntactically tortuous Finnegans Wake by James Joyce.

They have dug deep to winkle out some of the most interesting artists to emerge recently, from Beatrice Dillon, described by The Guardian as "the most thrilling new artist in electronic music"; Euro-dub maestros Rhythm & Sound's elegant collaboration with Cornell Campbell, 'King In My Empire', while English composer Daniel Blumberg's heart-stoppingly beautiful 'The Bomb' is a tour-de-force. If this is a bath, then release yourself to its warmth; Epsom salts for the soul. Sink in, let yourself go.