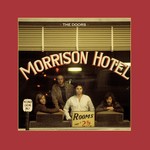 For this new collection, the original album has been expanded with more than an hour of unreleased recordings taken from the sessions for Morrison Hotel. These 19 outtakes transport listeners into the studio with Jim Morrison, John Densmore, Robby Krieger, and Ray Manzarek for an unprecedented perspective on the making of the album.

Among the treasure trove of unreleased outtakes are also rough versions of Morrison Hotel tracks "Peace Frog" and "Blue Sunday," as well as The Doors rarity "I Will Never Be Untrue." The collection also captures some incredible session outtakes of the band jamming on cover versions of the Motown classic "Money (That's What I Want)" and B.B. King's "Rock Me."