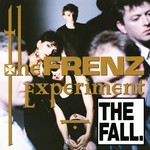 In 1987, The Fall scored their first UK Top 30 singles chart position with their cover of the Northern Soul standard, "There's A Ghost In My House", and supported it with a series of career-best shows. "Hit The North", one of their much-loved anthems, followed in October and then, finally, The Frenz Experiment - which contained these songs, was released at the end of February 1988.

Available as an expanded edition on 2CD and 2LP, the releases both contain the original album, plus singles and B-Sides. The CD version also includes a previously unreleased 4-track BBC session and "A Day In The Life" Beatles cover rarity, plus a 24-page booklet with new interviews. The LP version contains extensive sleeve notes with new interviews. The notes included with both formats contain brand new interviews conducted by Daryl Easlea in May 2020.