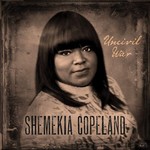 'UNCIVIL WAR'- recorded in Nashville with award-winning producer and musician Will Kimbrough at the helm-is a career-defining album for Copeland. Soulful and uncompromising, 'UNCIVIL WAR' tackles the problems of contemporary American life head on with memorable songs performed with nuance, understanding, and a demand for change. It also brings Copeland's fiercely independent, sultry R&B fire to songs more personal than political.

Click here to watch and share the video for Clotilda's On Fire, the leadoff track from UNCIVIL WAR. It's a true, torn-from-history song telling the story of the very last slave ship to arrive in America (in Mobile Bay, Alabama) in 1859, 50 years after the slave trade was banned. The song-featuring Alabama native Jason Isbell playing ferocious blues guitar-is a hair-raising look at living American history delivered with power, tenderness, and jaw-dropping intensity.