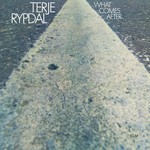 Terje Rypdal
What Comes After

Initially published in January 1974, CD is re-released in October 2020 in the ECM Touchstone Series.

What Comes After introduced a new alliance with American bassist Barre Phillips whose freely creative arco playing is often the second lead voice (two of the compositions are also Barre's). The unorthodox line-up includes contributions from powerhouse bass guitarist Sveinung Hovensjø, an important collaborator throughout the 70s (in the Odyssey band and other ensembles), and from classical oboist Erik Niord Larsen. Rypdal, Phillips and Christensen periodically played completely improvised concerts in 1973, and free music's sense of anything-can-happen also influences What Comes After. In this spirit, Jon Christensen's instrumental responsibilities extend, uncharacteristically, to playing organ on "Séjours", a piece which also features Terje on flute. The concluding "Back of J," is developed as an elegant rubato ballad featuring Phillips's bass, Rypdal's acoustic guitar, and Christensen's cymbals. From moment to moment, the soundscape changes on What Comes After, making it an album that invites repeated investigation to unlock its mysteries.

Bend It
Yearning
Icing
What Comes After
Sejours
Back Of J