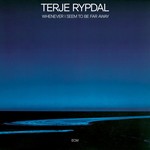 Terje Rypdal
Whenever I Seem To Be Far Away

Whenever I Seem To Be Far Away is, by common consensus, one of Terje's early masterpieces. Rypdal has said that he sometimes felt conflicted in his early years, pulled in different directions by the urges to compose orchestral music and to develop an improvising language as a guitarist drawing upon the sonorities of rock rather than jazz. The demands of the mediums could seem contradictory. Not on Whenever I Seem To Be Far Away, however. "Terje Rypdal pursues his own way with purity, clarity and inspirational complexity," the reviewer in the Los Angeles Free Press declared. "He touches you on an improvisational level and a compositional level. I never heard an electric guitar sound so natural in an orchestral setting before." An important contributor here was Mladen Gutesha, the Saravejo-born conductor and arranger who worked on several ECM sessions which framed improvisers with string players, including Keith Jarrett's In The Light, Luminessence and Arbour Zena, and Nana Vasconçelos's Saudades. On the title piece of Whenever I Seem To Be Far Away (subtitled "Image for Electric Guitar, Strings, Oboe and Clarinet"), the players of the Südfunk Symphony convincingly echo the yearning quality of Terje's singing electric guitar, with moving results.