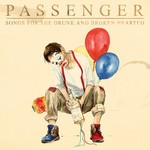 Passenger
Songs For The Drunk And Broken Hearted (Deluxe CD)

'Songs For The Drunk and Brokenhearted', is remarkably the 13th Studio album from this utterly prolific song writer known as 'Passenger or Mike' to millions all over the world. Written through a heavy touring schedule in 2018 and 2019 the writing of this album was spread far and wide all over the world but the roots are firmly planted in England. This is Mike's most quintessentially English album to date, there are echoes of the Kinks, The Smiths and George Harrison in much of the songwriting and the album was recorded in Mike's very own 'Black Crow Studios' in his hometown of Brighton.

CD1
1. Sword From The Stone
2. Tip Of My Tongue
3. What You're Waiting For
4. The Way That I Love You
5. Remember To Forget
6. Sandstorm
7. A Song For The Drunk And Broken Hearted
8. Suzanne
9. Nothing Aches Like A Broken Heart
10. London In The Spring

CD2
1. London In The Spring (Acoustic)
2. Nothing Aches Like A Broken (Acoustic)
3. Suzanne (Acoustic)
4. A Song For The Drunk And Broken Hearted (Acoustic)
5. Sandstorm (Acoustic)
6. Remember To Forget (Acoustic)
7. The Way That I Love You (Acoustic)
8. What You're Waiting For (Acoustic)
9. Tip Of My Tongue (Acoustic)
10. Sword From The Stone (Acoustic)