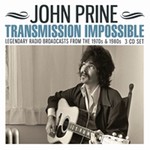 Disc one includes John's superb performance given at Rockefellers in Houston, Texas, on 6th February 1984. Prine performed two shows that night, and the one here is his quite magnificent late show.

Disc three contains all of John Prine's superb BBC Sessions recorded in the BEEB's studios in 1971 and 1973.