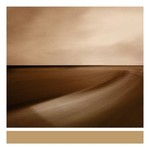 Originally released in 2010, Small Craft On a Milk Sea was Brian Eno's first release on Warp Records, and his first new album since 2005's Another Day On Earth. It takes the form of fourteen improvised pieces conceived to be "the mirror image of silent movies - sound-only movies". Made in collaboration with long-term associates Jon Hopkins and Leo Abrahams.

Two institutions of electronic music, braininess, and design-- Brian Eno and Warp Records-- come together for their first-ever co-release.
Pitchfork