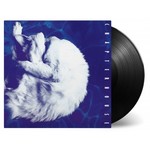 British shoegazing/alternative rock band Chapterhouse released two albums during their existence, Whirlpool (1991) and Blood Music (1993). Their debut album is a fantastic example of shoegaze at its best. The wall of sound approach is built around dance music structures and they're creating some heavy grooves. This classic is definitely set in the nineties but has strangely stood the test of time.