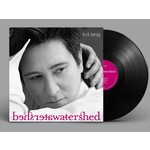 k.d. lang's acclaimed 2008 album is available on vinyl for the first time.

Watershed was the first album of newly written material from lang since 2000's Invincible Summer and her first studio album since 2004's Canadian songbook, Hymns of the 49th Parallel. The Times of London declared it "a masterpiece." The New York Times said: "Few singers command such perfection of pitch. Her voice, at once beautiful and unadorned and softened with a veil of smoke, invariably hits the middle of a note and remains there."

As the title suggests, Watershed represented a milestone in k.d. lang's groundbreaking career. For the first time, she assumed the role of producer-as well as writer, singer, and multi-instrumentalist-for this album of eleven new songs. lang reunited with longtime collaborators from both the studio and the road on the album: pianist Teddy Borowiecki, bassist David Piltch, steel player Greg Leisz, and guitarist Ben Mink. Jon Hassell makes a guest appearance on trumpet, as does Punch Brothers banjo player Noam Pikelny.