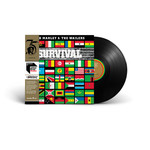 Containing what is considered Marley's most defiant and politically charged statement to date, Survival concerns itself with the expressed solidarity of not only Africa, but of humanity at large. The album was controversial right down to the jacket, which contains a crude schematic of the stowage compartment of a typical transatlantic slave ship. Survival is intended as a wake-up call for everyman to resist and fight oppression in all of its insidious forms. From Tyrone Downie's opening synthesizer strains on "So Much Trouble in the World" to the keyboard accents emerging throughout "Zimbabwe," the sounds of Survival are notably modern.

The overwhelming influence of contemporary African music is also cited with the incorporation of brass, á la Fela Kuti and his horn-driven Africa '70. While "Top Rankin'," "Ride Natty Ride," and "Wake Up and Live" are the most obvious to benefit from this influence, there are other and often more subtle inspirations scattered throughout. Survival could rightly be considered a concept album. Marley had rarely been so pointed and persistent in his content.

The days of the musical parable are more or less replaced by direct and confrontational lyrics. From the subversive "Zimbabwe" -- which affirms the calls for the revolution and ultimate liberation of the South African country -- to the somewhat more introspective and optimistic "Africa Unite," the message of this album is clearly a call to arms for those wanting to abolish the subjugation and tyranny of not only Africans, but all humankind. Likewise, Survival reinforces the image of Marley as a folk hero to those suffering from oppression.
All Music Guide.