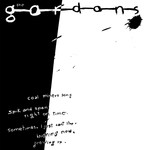 The Gordons crashed upon the do-it-yourself scene of early 1980s Christchurch with torrential force, self-releasing two foundational planks of the NZ underground.

Future Shock, a three-song 7-inch released in 1980, is a wild-eyed rampage, as staggering as any feedback-addled punk then being recorded at Southern Studios. The Gordons LP, which followed in 1981, matches the abandon with motorik churn and livewire dissonance, evoking antecedents as divergent as This Kind Of Punishment and the Dead C.

A. Future Shock
B1. Machine Song
B2. Adults And Children