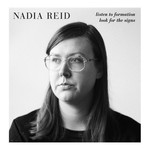 To celebrate the 6th anniversary of its original release, Nadia Reid announces a remaster and repress of her debut album.

Listen to Formation, Look for the Signs was recorded in Lyttelton in 2014 with producer Ben Edwards and long-time band Sam Taylor, Richie Pickard, Joe McCallum and features Anita Clark on track 2.