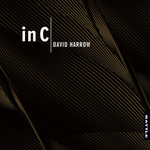 "One of the joys of In C is the interaction of the instruments in poly-rhythmic combinations that spontaneously arise between patterns. Some quite fantastic shapes will arise and disintegrate as these groups move through the piece." - Terry Riley