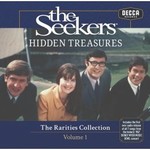 On the back of their enormously successful "Farewell" release of 2019, The Seekers present the first volume of a projected three in a collection of rarities and surprises. This album includes the FIRST EVER AUDIO RELEASE of all seven songs from the historic 1967 Sidney Myer Music Bowl concert.

Some of the tracks have previously had their brief moment in the sun; others are being made available in audio form for the first time. Included are sea shanties and jingles, a rare version of Waltzing Matilda, and songs from their Big Show Tour.

All tracks have been lovingly restored for fans and collectors alike.