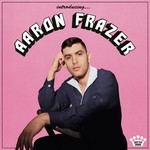 Soft-spoken with the look of a slightly disaffected 1950s matinee idol, Aaron Frazer (of Durand Jones & The Indications) possesses a unique voice that's both contemporary and timeless.

The Brooklyn-based, Baltimore-raised songwriter first came into the international spotlight as the drummer and co-lead singer for Durand Jones & The Indications. He's certainly created a community through his work with the Indications, gospel-soul project The Flying Stars of Brooklyn, and countless side shows in Bloomington and New York. Throughout, Frazer has used music to call attention to issues of inequity and injustice, while highlighting the work of organizations like the Poor People's Campaign.

The 12 songs on Introducing… combine '70s soul with Auerbach's particular sensibilities, and include songs with a message in the key of Gil Scott-Heron, as well as uplifting tales of love told through a blend of disco, gospel, and doo-wop. The album was recorded in a week at Auerbach's antique and ephemera-laden studio in Nashville following a rapid and prolific songwriting session. "Dan likes to have this writing process where you just let go and embrace the kind of pressure cooker environment that comes with extreme time limitation," Aaron says, adding that the writing sessions pushed him creatively. Dan brought in legendary songwriters such as L. Russell Brown, who wrote hits for fellow falsetto Frankie Valli and co-wrote the album's opening track, "You Don't Wanna Be My Baby".