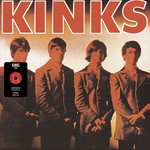 1964 debut album from one of the world's greatest and most successful rock bands, featuring a mixture of popular R&B covers and the band's own compositions.

Features the UK No.1 chart hit 'You Really Got Me', the group's third single, written by Ray Davies and built around a heavy guitar riff played by Dave Davies.

A1. Beautiful Delilah
A2. So Mystifying
A3. Just Can't Go to Sleep (Mono Mix)
A4. Long Tall Shorty
A5. I Took My Baby Home
A6. I'm a Lover Not a Fighter
A7. You Really Got Me (Mono Mix)
B1. Cadillac
B2. Bald Headed Woman
B3. Revenge (Mono Mix)
B4. Too Much Monkey Business
B5. I've Been Driving On Bald Mountain
B6. Stop Your Sobbing
B7. Got Love if You Want It (Mono Mix)