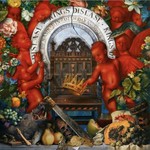 Longevity in rap isn't something easily achieved. If an artist makes it to five years, they're considered a success. If they make it to 10, they're a respected veteran. Nas has been in the game for almost 30 years and he sounds just as sharp now as he did when he dropped 'Illmatic' in 1994. Having already surpassed legendary status, he's donning royal robes for his 13th studio album, 'King's Disease' - and there's no denying they look good on the 46-year-old.

No longer painting pictures of the projects from his bedroom window, Nas finds himself sitting on his newly appointed throne, overseeing cultural excellence and shining a light on the world's injustices. If he's not rallying behind successful Black celebrities who are unfairly scrutinised in the media ('10 Points'), then he's toasting to Black pride ('Ultra Black') or putting his own career under the microscope ('The Cure').

It's a huge improvement on his last project - 2018's Kanye West-produced 'Nasir' - and the marriage between beats and rhymes sounds effortless. Nas has had a few problems when it's come to picking the right beats to back his poetic intricacies, but there are no such missteps this time around. From the mesmerising keys of 'Til The War Is Won' to the warped whistles on the introspective 'Car #85', executive producer Hit-Boy gets everything right.

Nas is accompanied by an all-star cast that includes Anderson .Paak, Big Sean and Charlie Wilson. But it's only longtime rhyme partner AZ who outshines him, appearing on 'Full Circle', a track that sees Nas reunite with his former group The Firm. AZ elevates the song to a higher plane: "Dialogue superb, flyest cars on the curb, word / When I evolved, a higher God emerged reserved". Dr. Dre makes an appearance here, too, boldly claiming: "Stretch marks from this art / Gave birth to this."

Nas hops in and out of the hammering bass thumps on '27 Summers', flaunting his penchant for luxurious raps: "Courtside Rockets, Warriors, Curry up / Smokin' weed in a tux, sippin' Ricard / Sitting on Governors Isle with all the killers / Premier movies with my man De Niro."

The album is stuffed with this kind of lyrical proficiency, which demands high levels of dissection. 'King's Disease' is an acutely perceptive and culturally relevant body of work that finds its author willing to try out new ideas. There's a genuine conversation to be had about whether it's the best rap album of the year so far.
4 / 5 NME.