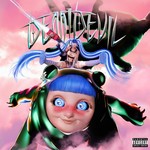 "I just like being a little demon - a little devil hellraiser," Ashnikko giggles, her voice both razor-sharp and feather-light. The London-based American artist is describing the concept behind her new mixtape DEMIDEVIL, the cover art of which shows her as a dragon being ridden by a demidevil version of herself. It's just like everything Ashnikko does: as real as it is surreal, and as terrifying as it is hilarious. "It sheds light on the polarity of my songs - some are tender and sweet, and some are more intense. The songs are very different, and DEMIDEVIL brings them together."

The mixtape is Ashnikko's first release since 2019's Hi, It's Me, the EP that introduced the world to "STUPID": her scariest iteration yet. The homicidal rap song propelled Ash to viral fame, spawning millions of TikToks. After a US tour with rapper Danny Brown, a headline-stealing femdom appearance flanked by male servants on the red carpet at the BRITs 2020, a Doja Cat support tour and string of sold-out headline shows of her own on the horizon, the coronavirus lockdown hit. That's when she threw her energy into compiling her best project yet: a collection of songs that celebrate female sexuality and noughties pop, featuring Grimes, Princess Nokia, Kelis, a musical theater number about the clitoris, and countless vicious one-liners.