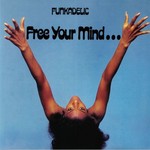 It's one of the best titles in modern musical history, for song and for album, and as a call to arms mentally and physically the promise of funk was never so perfectly stated. If it were just a title then there'd be little more to say, but happily, Free Your Mind lives up to it throughout as another example of Funkadelic getting busy and taking everyone with it. The title track itself kicks things off with rumbling industrial noises and space alien sound effects, before a call-and-response chant between deep and chirpy voices brings the concept to full life.

As the response voices say, "The kingdom of heaven is within!" The low and dirty groove rumbles along for ten minutes of dark fun, with Bernie Worrell turning in a great keyboard solo toward the end -- listening to it, one gets the feeling that if Can were this naturally funky, they'd end up sounding like this. From there the band makes its way through a total of six songs, ranging from the good to astoundingly great. "Funky Dollar Bill" is the other standout track from the proceedings, with a great, throw-it-down chorus and rhythm and a sharp, cutting lyric that's as good to think about as it is to sing out loud. The closing "Eulogy and Light," meanwhile, predates Prince with its backward masking and somewhat altered version of the Lord's Prayer and Psalm 23. At other points, even if the song is a little more straightforward, there's something worthwhile about it, like the random stereo panning and Eddie Hazel's insane guitar soloing on "I Wanna Know If It's Good for You," with more zoned and stoned keyboard work from Worrell to top things off. The amount of drugs going down for these sessions in particular must have been notable, but the end results make it worthy.
4.5 / 5 All Music Guide.