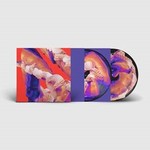 Belfast-born, London-based duo Bicep (Andy Ferguson and Matt McBriar) have become one of the world's most avidly appreciated curators and producers of electronic dance music.
Isles expands on the artful energy of their 2017 debut, while digging deeper into the sounds, experiences and emotions that have influenced their lives and work - incorporating influences which range from post-dubstep to old-school rave tunes.

They describe Isles as "a snapshot in time" of their work in this period, with the tracks designed to evolve in their different iterations from record to live show and beyond. "This is definitely the home listening version," says Matt, "the live version will be much, much harder".

Apricots is an expert demonstration of how Bicep's style is in dialogue with so many important eras of dance music's history yet also remains distinctly their own. Apricots features shuffling broken beat drums which push the tune forward, the gently insistent groove providing a base from which the synths and vocal loops can build. It makes for hugely stirring listening, particularly when the ever-climbing synths reach their apex at the track's climax. Other entries here may deliver some harder timbres - there are electro and trance influences lurking towards the backend of Isles - but Bicep still find the emotional sweet spot time and again across the course of the album.
The album's striking, explosive artwork is by Studio Degrau, creators of the iconic imagery for the duo's first album.