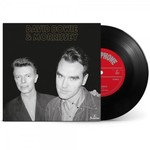 The 7-inch double A-side single features 'Cosmic Dancer' alongside Morrissey's 2020 cover of The Jam's 'That's Entertainment'. The sleeve front and back features photographs of David Bowie with Morrissey and were taken in New York City by Linder Sterling.