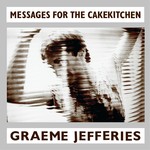 As the follow up to his stellar memoir Time Flowing Backwards, voted by Pitchfork as one of the 10 best music books of 2019, and 2020's Trouble Again in this Town, his first new LP in almost 5 years, legendary New Zealand musician Graeme Jefferies is reissuing his seminal early Flying Nun solo album Messages For The Cakekitchen, originally released in 1988 during the heyday of the kiwi music revolution and out-of-print for close to twenty years.

Between his stint in This Kind of Punishment and his longstanding role as head baker in The Cakekitchen, Graeme crafted a true solo album, writing, singing, and playing almost every instrument on each of the 9 tracks with a few exceptions. His haunting baritone centers the album's dark emotional focus, while the use of a variety of stringed instrument sounds weaves beautiful textures that seemingly soothe the singer's troubled soul and provide the needed catharsis that makes the album both distinct and compelling. Famed music critic Byron Coley describes Messages… as an album to be marveled at in terms of "its depth and width [and] seductive pull."

The album was recorded in Auckland and Christchurch from November 1985 to February 1987 on a TEAC A3340S Four-Track, and it was mixed in Dunedin by Graeme and his brother and former TKP and Nocturnal Projections bandmate, Peter Jefferies. Here, we hear the origins of the "found-sound" tapestries which continue to be a hallmark of Graeme's music to this day.