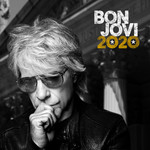 Bon Jovi 2020 makes a wry reference to an election year with the title, and album art featuring an American flag in the reflection of a pensive Jon Bon Jovi's sunglasses. The first single 'Limitless' is an upbeat anthem encouraging optimism in an uncertain world. The release features a compelling breadth and depth of songwriting from Jon Bon Jovi where he tackles current tough topics such as gun control, veterans' issues, politics, the meaning of family, and much more. As Jon stated: "It encompasses life, love, and loss."